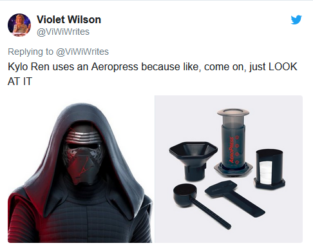 Have you ever woken up in the middle of the night in a cold sweat terrified that if asked by your favorite Star Wars character to get them coffee, you could not complete the task?

Probably not. But who doesn’t want to learn more about their favorite fictional characters, including how they prefer their morning cup of Joe.

Fan fiction writer, Violet Wilson, has given us just that with a creative twitter thread. Find your favorite character below.

Obi Wan is all about a quality, fresh french press.

Rey, like many of us, just stops by her favorite gas station to get her fix.

A pattern is beginning to emerge. Many Star Wars characters prefer coffee with a similar aesthetic.

The secret to how Han Solo does it all has finally been revealed– nonstop consumption of undiluted cold brew.

General Leia’s ideals inspire us all.

Luke’s drink of choice makes sense because he did have a lot of free time on that island.

We would expect nothing less from the woman so pure she literally died of a broken heart.

It’s rumored that what sent Ben Solo over the edge was being served an incorrect coffee order.

The real question is if any Star Wars character walked into Starbucks and ordered, would the barista get his or her name right? May the force be with the poor employee that misspells Darth Vader.